O’Donnell & Naccarato is proud to announce that we have joined the Structural Engineers 2050 Commitment Program. This comprehensive program has been designed to ensure substantive embodied carbon reductions in the design and construction of structural systems by the collective structural engineering profession. Ultimately, the fundamental goal is that “All structural engineers shall understand, reduce and ultimately eliminate embodied carbon in their projects by 2050.”

O&N’s commitment to this initiative begins with our Embodied Carbon Action Plan (ECAP) 2021, year one, which focuses on educating our staff, initiating our internal documentation process, determining potential reduction strategies, and bringing awareness to members of the A/E/C community that we interface with on a regular basis. Please see the link below to read the entire O&N Embodied Carbon Action Plan.

For more information on the Structural Engineers 2050 Commitment Program, click the link here.

Preserving our past for our future. From envelopes to interiors, renovations to additions, O’Donnell & Naccarato recognizes the intrinsic value of historic buildings and takes pride in working to conserve and protect our inherited built environment. Whether involving Adaptive Reuse, Renovation, Historic Preservation, or Restoration, our award-winning projects have been recognized time and time again by organizations such as the Preservation Alliance for Greater Philadelphia, the U.S. Green Building Council, and the National Association of Home Builders. The pride we take in the preservation of our historic projects, completing over 3,000 since 1981, is evident across not only Philadelphia but all over the country.

With the completion of our latest project, One City, we would like to give a sneak peek behind the curtain wall as to what goes into preserving our past for our future… 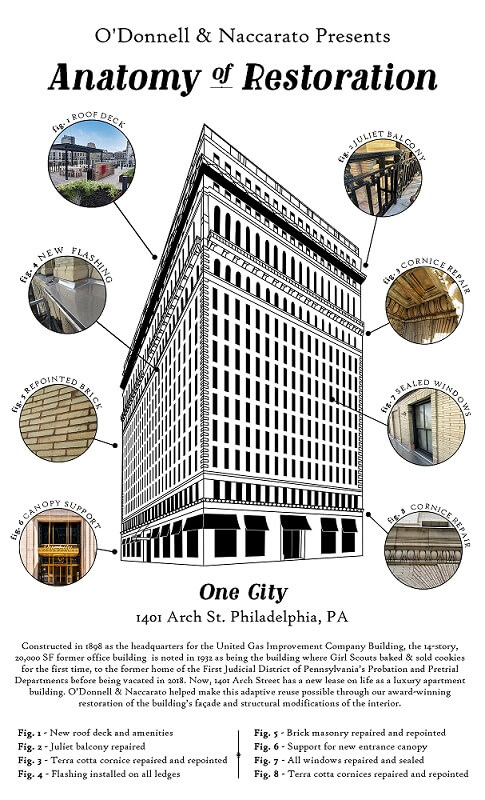 O’Donnell and Naccarato has lost a longtime client and great friend, Matthew J. Koenig, AIA, on Monday, July 12, 2021. Matt, a principal at Barton Partners Architects, was a talented architect who provided exemplary service to his many clients during his 30+ year career. Along the way, Matt made many friends at other design and construction firms with whom he collaborated. Matt was affable and an all-around great guy, and an avid golfer who co-chaired AIA Philadelphia’s annual golf tournament with me for more than 20 years. He was also a proud and active member of the Carpenters’ Company of the City and County of Philadelphia. Matt leaves behind his devoted wife Maria and their 2 children, Nikole & Jakob. Please keep them all in your thoughts and prayers during these most difficult days.

O’Donnell & Naccarato was nominated by the ACE Mentor Program of Greater Philadelphia to receive the 2021 Faces of Philanthropy Award from the Philadelphia Business Journal.

O’Donnell & Naccarato Structural Engineers has had a long-standing philanthropic partnership with the ACE Mentor Program of America and the local affiliate, ACE Mentor Program of Greater Philadelphia. We are proud of our partnership and are honored to have been nominated for the Faces of Philanthropy Award. Anthony Naccarato (PE, SECB), President of O&N, is a founder of the Philadelphia affiliate and currently serves on the ACE National Advisory Council. O&N Principal, Brian Rawlings (PE, SECB) currently serves as the Board Secretary. Melissa Raffel, Affiliate Director of ACE Greater Philadelphia, nominated O&N for this award. Here is an excerpt from the nomination:

“When safety concerns around the global pandemic prompted us to cancel our largest fundraiser, the Annual Scholarship Breakfast, postpone the Golf Outing until the Fall of 2021, and delay the increasingly well attended Giant Jenga event until February 2022, Rawlings and his colleagues from O&N stepped up and became invaluable advocates. He and ACE’s Development Committee campaigned to raise $70,000 for ACE Greater Philadelphia to facilitate continued programming to high school students and, for the 20th year in a row, provide impactful scholarships to graduating seniors.”

O&N continues to expand our partnership with ACE Mentor Programs in both Indiana and New Jersey.

O&N Celebrates 40 Years of Support – Our Employees Are Our Best Asset!

As part of our 40th anniversary, we would like to tell you a bit about ourselves and all of our excellent employees. Here a couple of interesting facts about our structural engineering firm employees and how we have grown as a company over the past 40 years! 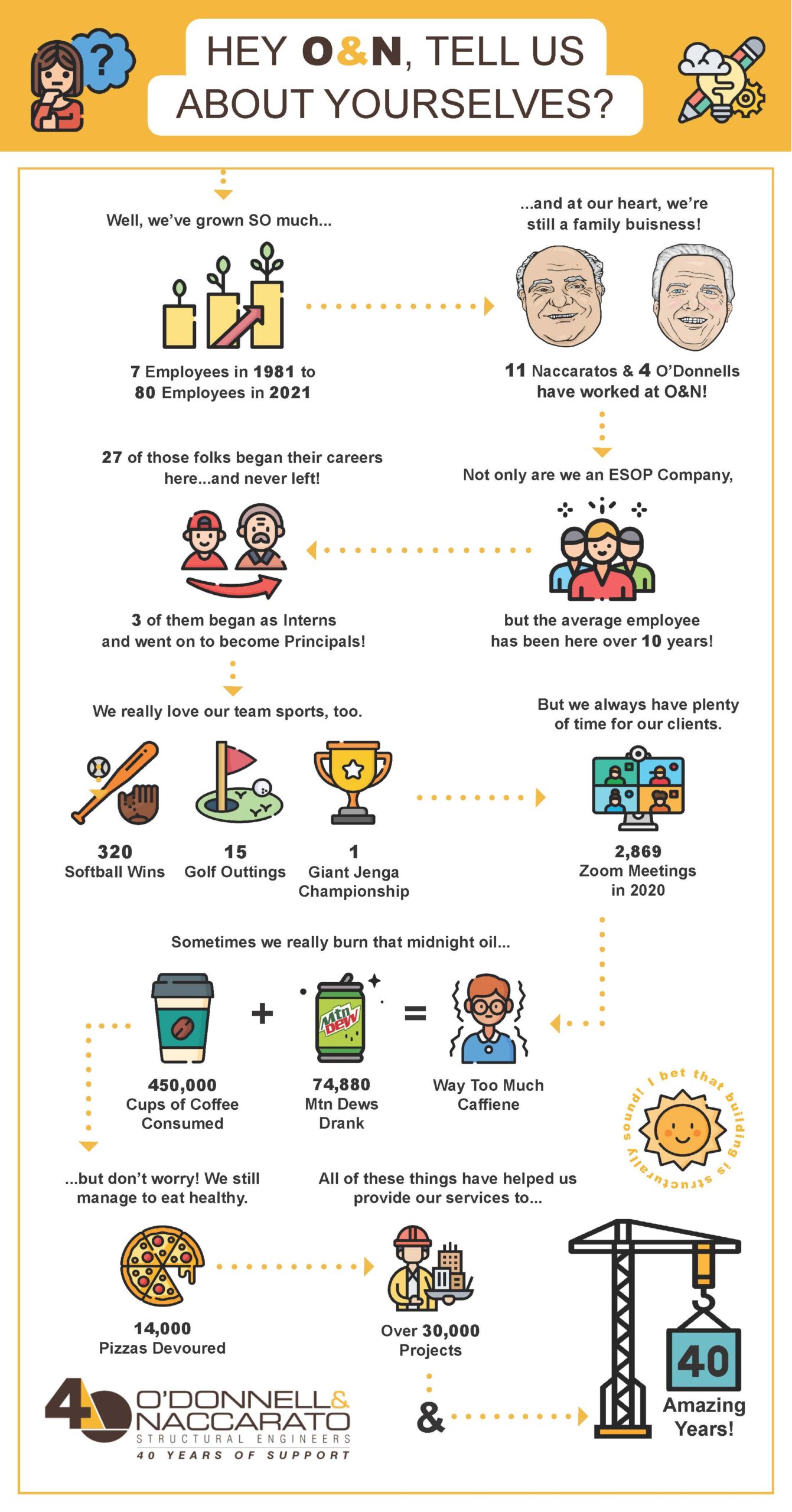 O’Donnell & Naccarato has been involved with the National Kidney Foundation (NKF), an organization dedicated to preventing kidney diseases, improving the health of individuals and families affected by these diseases, and making organ transplants available to more people. The NKF has been serving Eastern Pennsylvania and New Jersey since 2008. President Anthony Naccarato has been a member of its volunteer Board of Advisors since 2013 and the Board Chairman for the past 3 years. On March 11th, 2021, during the NKF 2021 Eve of Giving event, Tony was honored with the Arthur P. Pasquarella Leadership in Action Award, which the Foundation describes as “No ordinary award, given to no ordinary volunteer.”

Motivated to support the NKF due to his brother-in-law’s battle with chronic kidney disease, Tony has applied his vast enthusiasm, business resources, and love of golf to promote NKF events such as the Kidney Walk, Kidney Ball/Eve of Giving, and countless successful golf outings. These activities raised critical and significant funds to support ongoing medical research programs, patient and community services, professional and community education, and organ donation awareness.

Accepting the award, Tony expressed that what he enjoys most about being a part of this team is the “great people on the Board” and their “passion and commitment to the mission of NKF” He is also extremely proud of efforts expanding the Foundation into greater parts of New Jersey.

We are pleased to celebrate Tony’s inspiring commitment to the NKF.

You can watch the full video from the NKF below, or by clicking here.

2021 marks the 40th anniversary of O’Donnell & Naccarato. We are proud to have supported and served our clients for all these years. Our structural engineering firm is looking forward to a bright, prosperous 2021. Join Tony Naccarato, O’Donnell & Naccarato’s President, to kick off our 40th year!

In the facade inspection article “Facade Inspections and Ordinances,” Director of Restoration Jason Coleman, PE, CDT, and Project Executive Matthew Mowrer, PE, document the reasons for and methods of facade inspections. The article also discusses the challenges faced by owners, developers, and property managers to maintain their buildings and comply with local ordinances.

“The individual or team performing the facade inspection must have an in-depth knowledge of facade construction, materials, and inspection techniques,” writes Coleman and Mowrer. “Facade deficiencies can be complex, and it’s up to those performing the inspection to understand visible signs on the surface as well as other patterns and signs that may be concealing a more severe defect or deficiency that is not visible.”

Some of the other topics discussed in the facade inspection article include structural versus nonstructural components and the importance of identifying such features.

Jason Coleman, PE, CDT, is the Director of Restoration and a Project Executive at O’Donnell & Naccarato. Jason has over 20 years of experience as a practicing engineer, with his areas of expertise including condition assessments and rehabilitation design of historical and parking structures. Matthew Mowrer, PE, serves as a Project Executive and has over 15 years of experience. Matthew’s areas of expertise include condition assessments and rehabilitation design of facades and parking structures. Both Jason and Matthew previously served as president of the ICRI Delaware Valley Chapter.

You can read the full facade inspection article here.